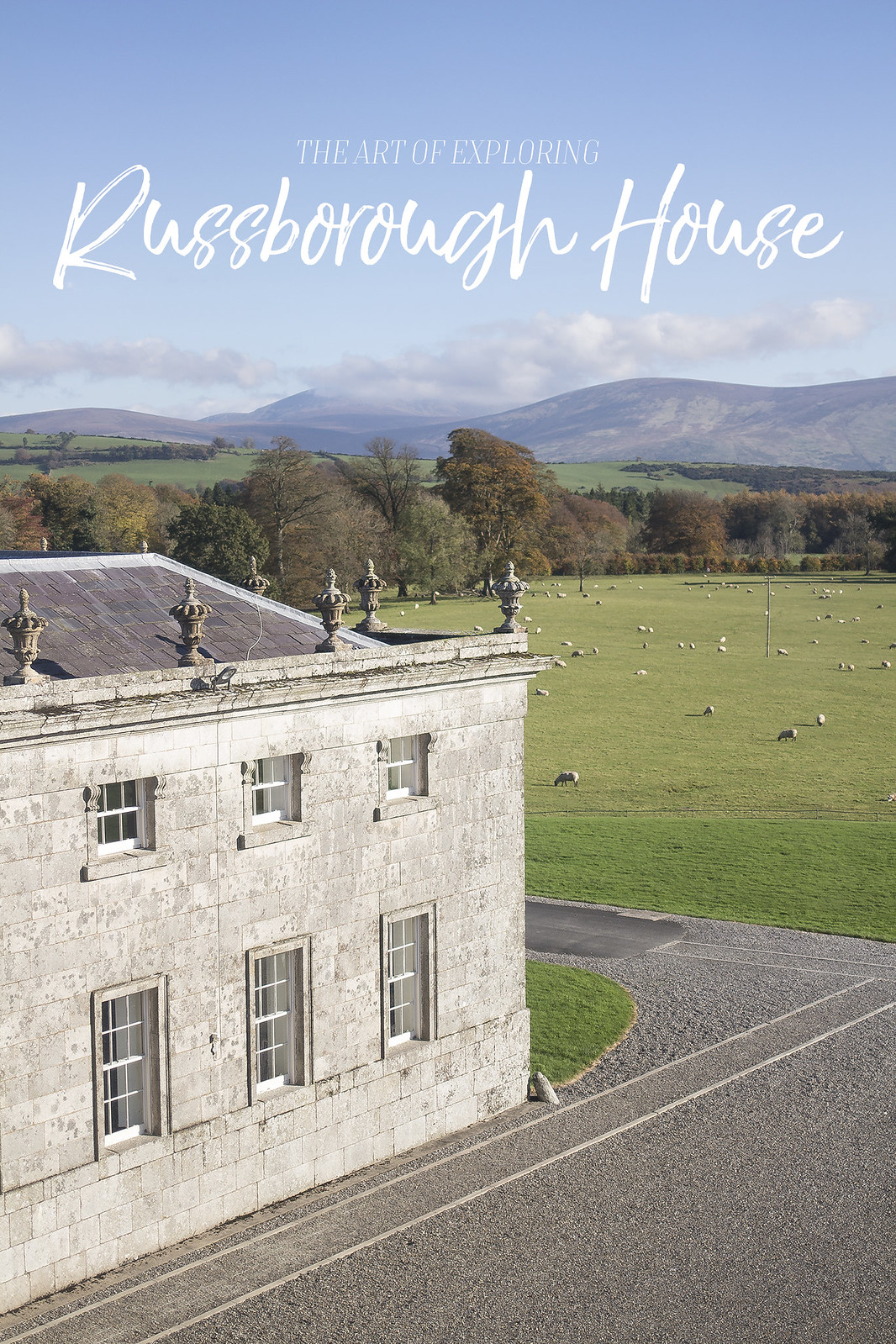 One golden afternoon in the late Autumn, I took the 65 bus to county Wicklow. I got off at the end of the line, in a town called Blessington. It wasn’t my first time here, actually. I had stayed here for a couple of days in the Avon Ri Lakeshore Resort a few years back. It is a group of self-catered townhouses on the shore of the Blessington Lakes. I have fond memories of the place and I would totally recommend it if you’re looking for a base to explore Wicklow or if you simply want an escape from the city. The lakes are the perfect setting for invigorating country walks.
Coincidentally, the Avon Ri is also the start of the Greenway Walk, where I was headed that morning. This is the trail that leads directly to Russborough House. This Irish Stately House had been on my list of places to see for a really long time. I had read that it was one of Ireland’s most beautiful houses and I was dying to see it for myself. 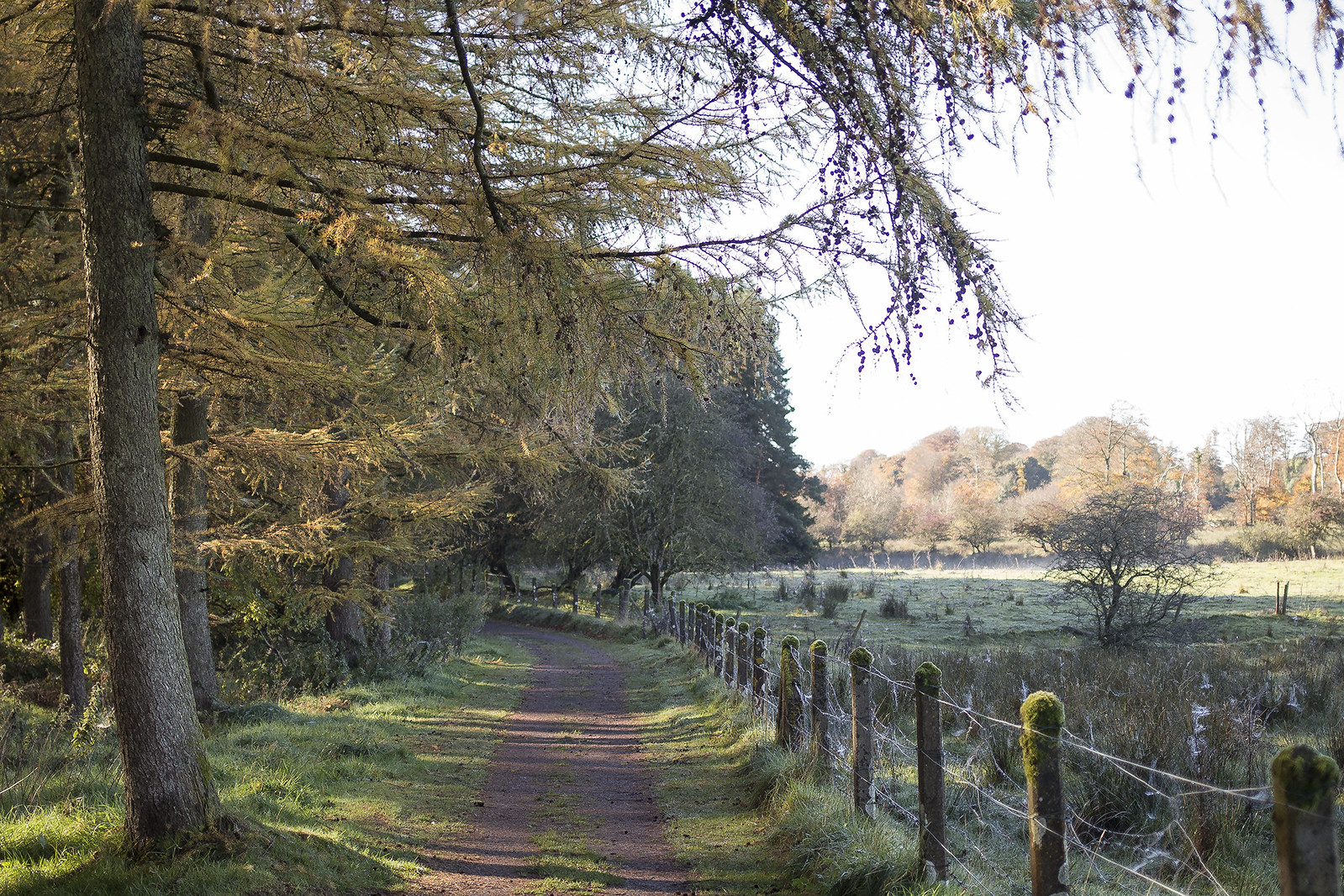 The Blessington Greenway trail is a pleasant one hour and half walk (one way) on flat, well-maintained paths. They follow first the shores of the lakes then they go through wild woodlands. Half-way through, I felt my shrivelled urban lungs expand and fill themselves with the crisp cold Autumn air of the morning. Dry leaves were crunching under my feet and the pine trees wrapped me with their musky silence.
At the end of the trail, a stoned arch marks the entrance to the Russborough demesne. It opens to a long avenue bordered with trees which leads directly to the 18th century house. Its 210 metre-long facade (the longest frontage in Ireland) embraces a phenomenal view of valleys, mountains, lakes and, of course, sheep.
I sat down on a bench to take it all in (and to recover from the previous long walk).
Revived by my surroundings, I then headed to the ticket office and booked a tour inside the house. The tour was to start in an hour which left me a bit of time to explore the house’s grounds. 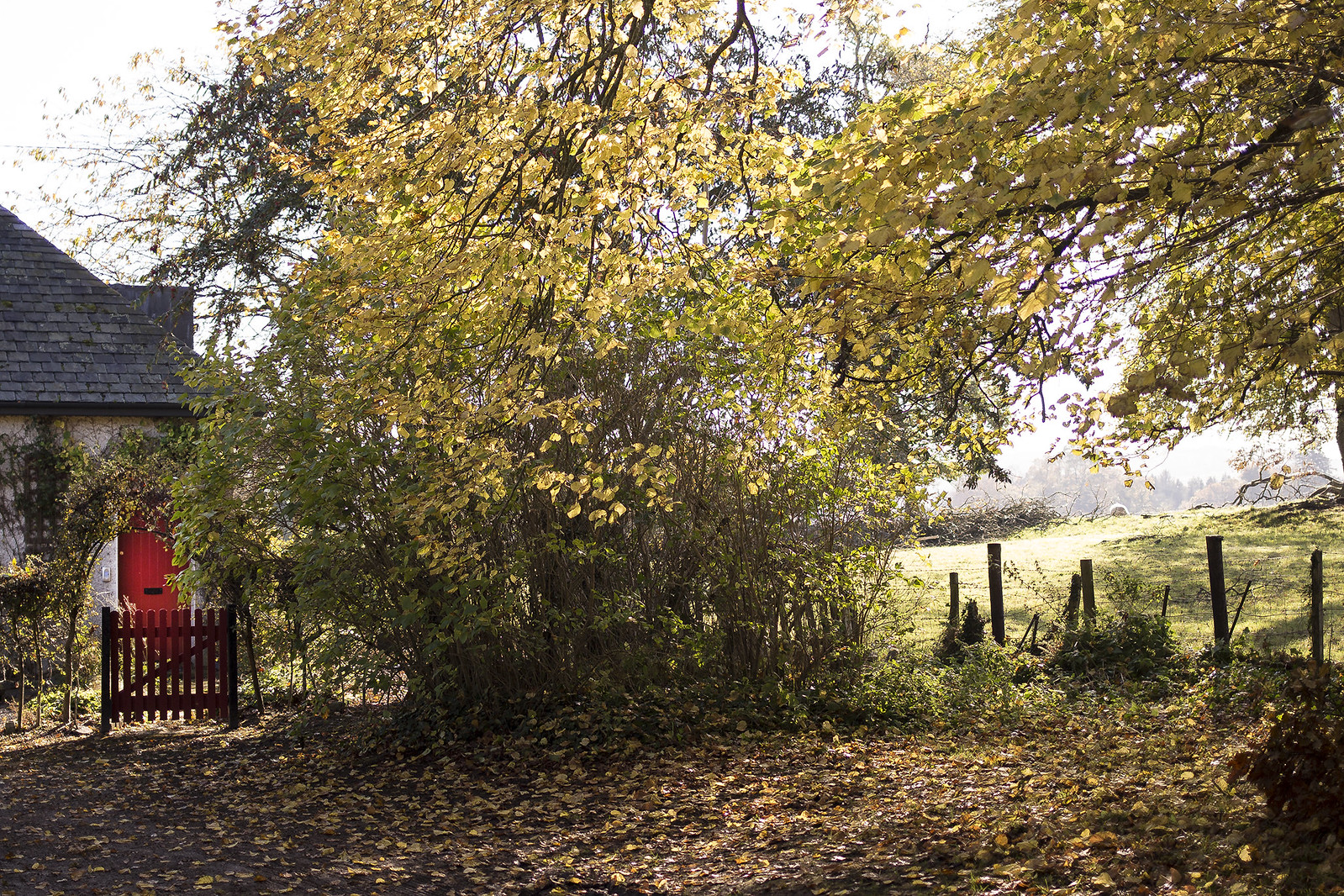 The courtyard is home to many artisan and craft stalls: a blacksmith, a candle-maker, a woodturner and a ceramicist. There, you will find also Ireland’s Bird of Prey Centre and if you’re lucky you might catch a show of falconry. It was a bit late in the year so I wasn’t. I didn’t feel too lucky either when I found out that the walled gardens were closed that day.
Nonetheless, I continued my exploration, walked by the maze and stumbled upon one of the previous owners’ grave, the 4th Earl of Milltown and the Countess. I also found a fairy trail and admired Lady’s Island where a little red Japanese bridge spans over a delightful brook.
But time was a-ticking and I headed back to the gift shop where the tour was to start. A friendly lady with a mellifluous germanic accent took our small group in the first room of the house. The dining room. 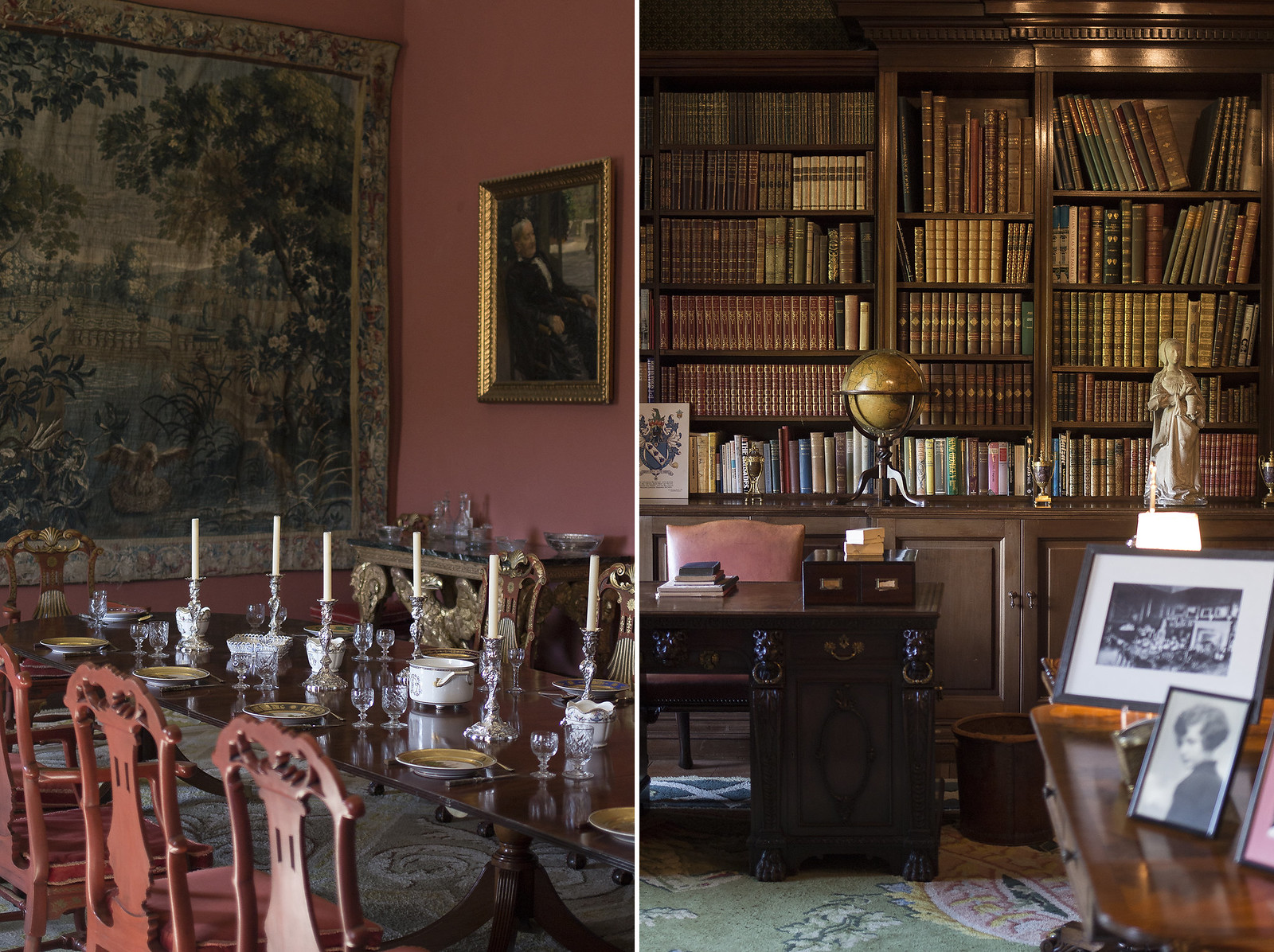 There, the long mahogany table had been laid out with silver candle holders, gilded porcelain plates and tiny crystal glasses for the sherry. Our tour guide set the scene and depicted the lives of those who once called Russborough home. It all started with Jospeh Leeson, 1st Earl of Milltown who asked Richard Cassels to design and build the house in 1741. Richard Cassels was one of the most prolific architects in Ireland of the time. He was a master of the Palladian style of which Russborough is a fine example.
The estate stayed in the Leeson family until 1914. It passed in the hands of a couple more owners then was finally acquired by Lord and Lady Beit. They were looking for a place to house their vast art collection.
The couple resided here until their final days (Lord Alfred Beit: 1994, Lady Beit: 2005) but they opened part of the house to the public, in the late seventies.
The life of the Beits at Russborough was eventful, to say the least. They’ve gone through: 4 robberies (one of them was even labelled ‘the biggest art robbery in history’ at the time), 1 forced occupation by the old IRA, 1 fire and 1 ghost. But not everything was gloom and doom, the couple actually had mostly a happy life here. They were renowned socialites and received many illustrious guests. Mick Jagger, Marianne Faithful, Jackie Kennedy, Fred Astaire and Coco Chanel to name a few.
Having noticed some books on the Mitford Sisters in the gift shop (I used to be obsessed with them!), I asked the tour lady if there was any connections with Russborough, could they have been guests here too?
To my absolute delight, she informed me that the sisters were actually cousins of Lady Clementine Beit! 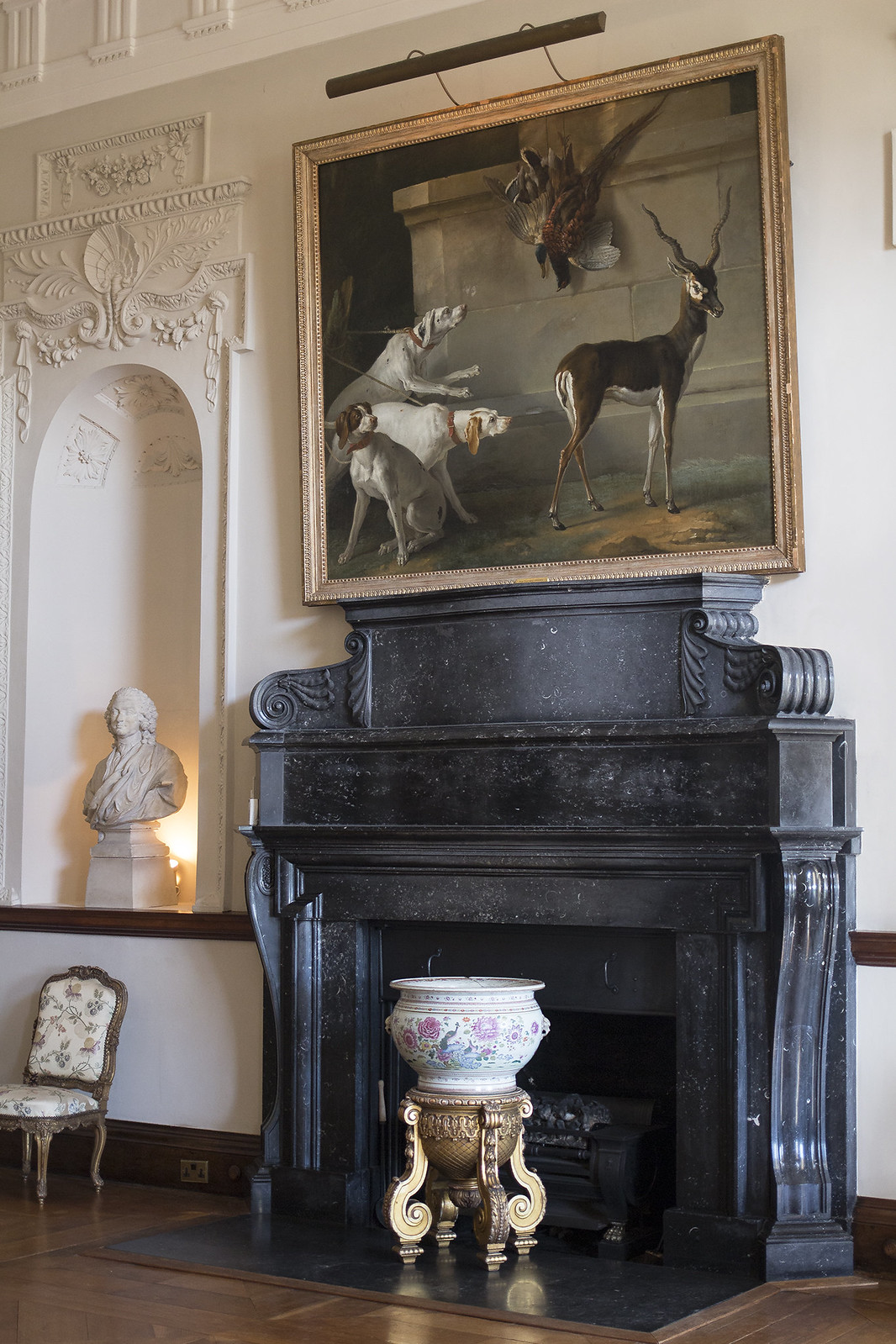 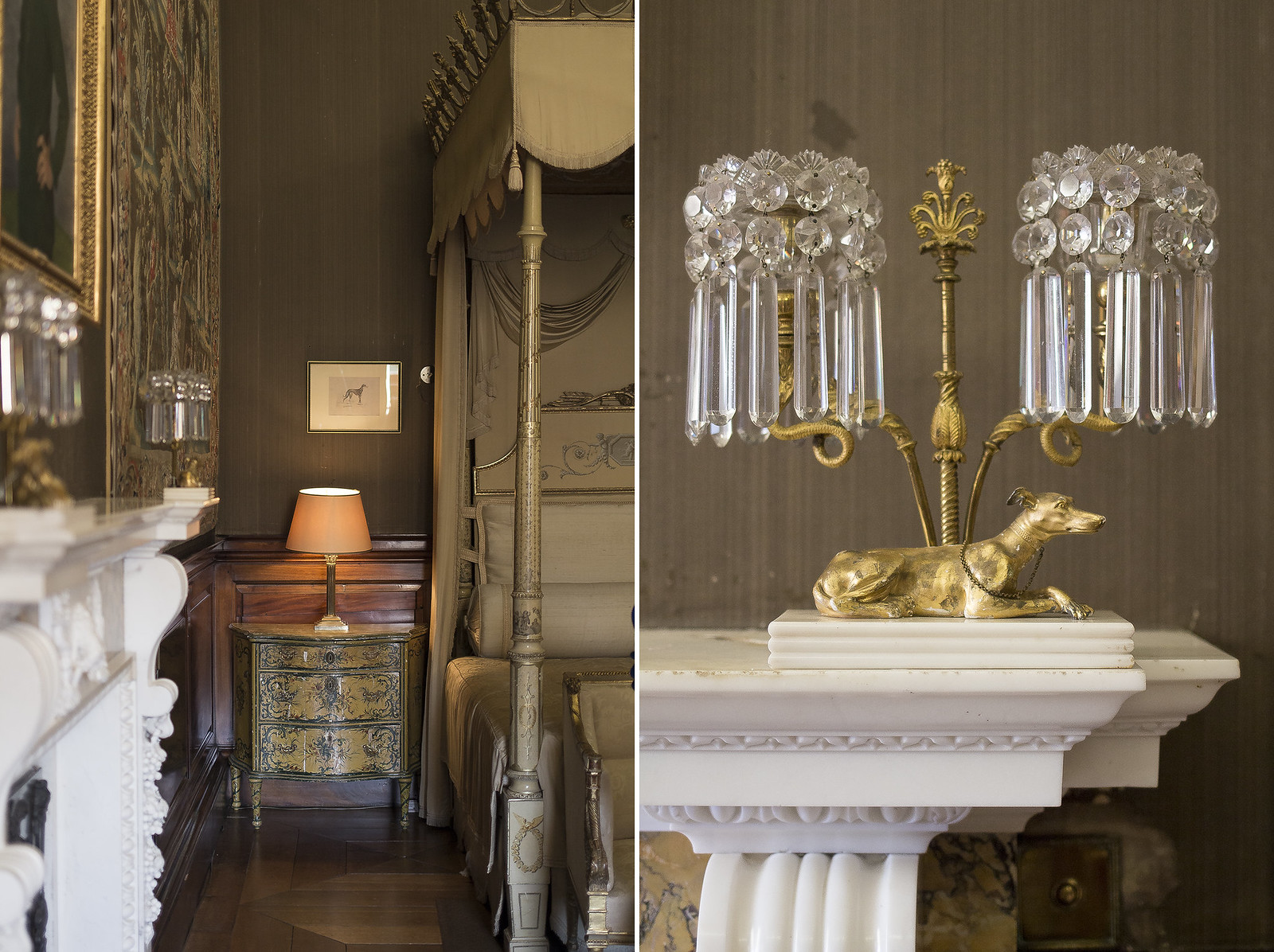 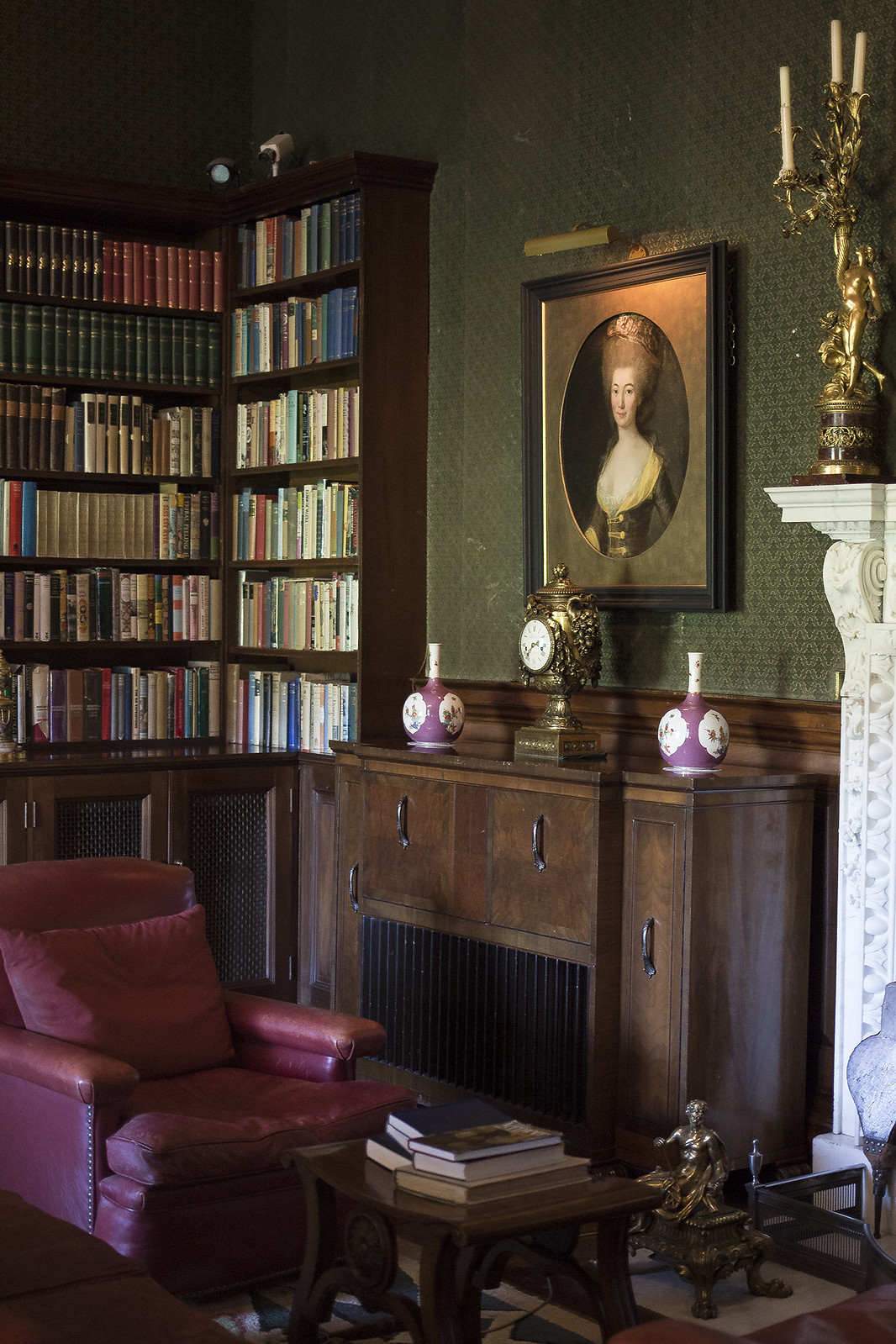 While learning about the life of the Beits, we had moved from one room to another. We passed the boudoir, the entrance hall, the reception room and my favourite, the library. As it happens, the favourite of the lady of the house too! Lady Clementine was a “mad bibliophile and adored being surrounded by books“. I couldn’t have thought of a better place for that as the walls were covered in books and the sofa near the chimney looked ever so inviting.
One thing that really impressed me throughout the whole visit was the ceiling and the wall plasterwork. The flamboyantly rococo stucco work was a speciality of the Lafranchini Brothers and if you see some in a Palladian house in Ireland, chances are they worked on them. 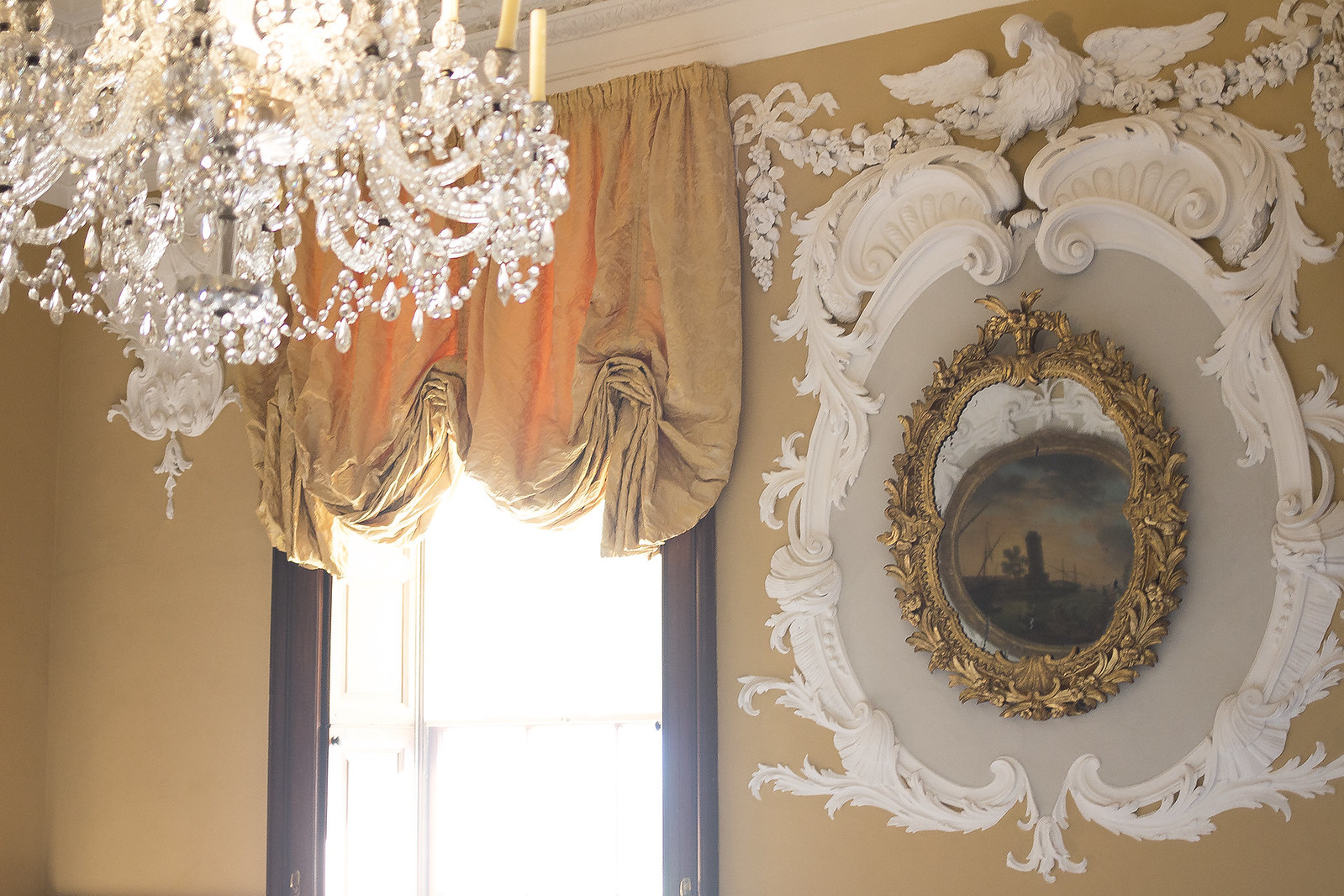 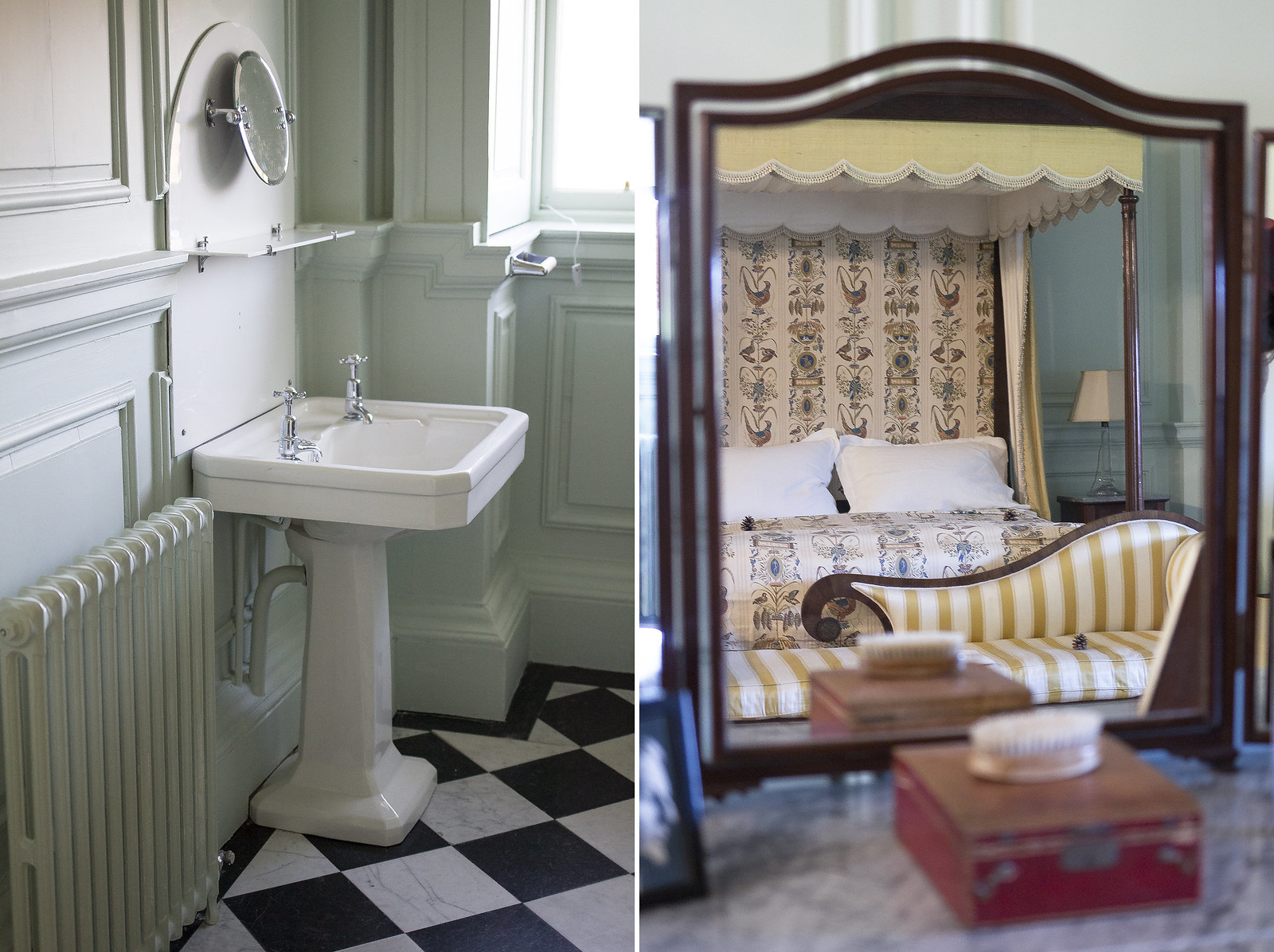 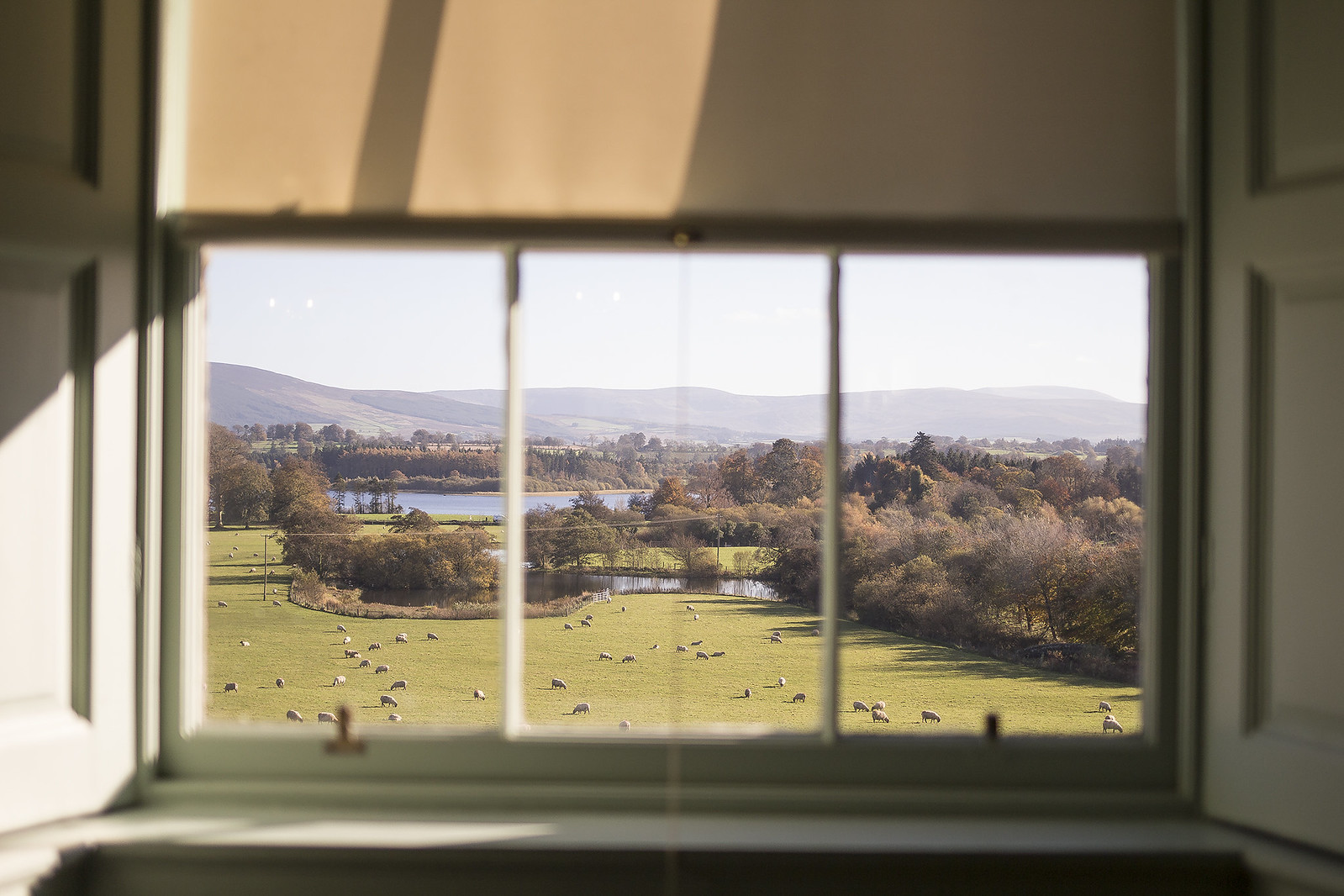 We climbed the equally ornate staircase to access the second floor. There the rooms are more plain, the showstopper here is undoubtedly the mesmerising view from the bedroom. My eyes got lost on the horizon and I couldn’t help thinking about the person waking up to this, every morning. They must have felt the luckiest human in the world!

Looking for more Wicklow gardens to visit? Head to my Wicklow section 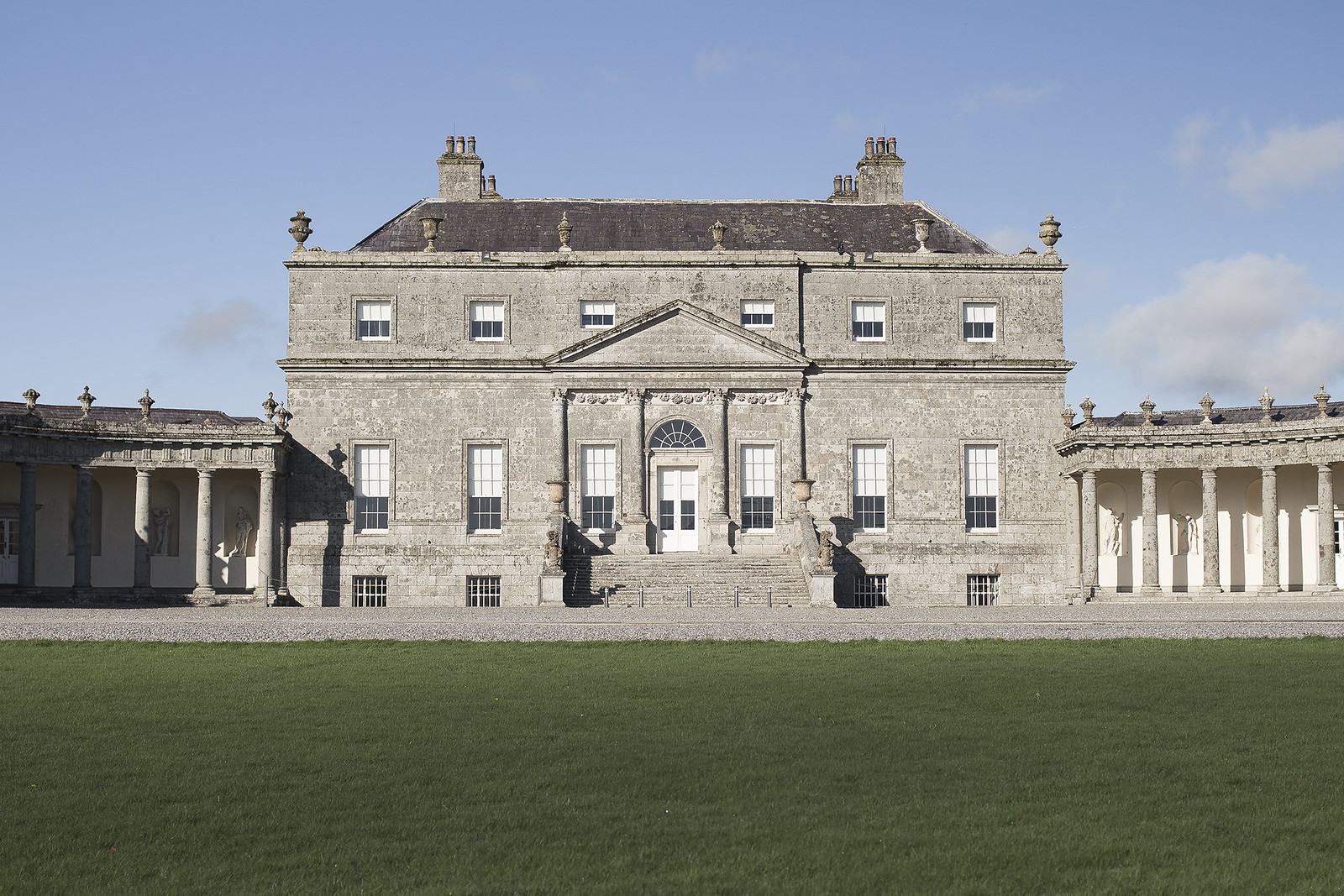 The trail starts at the Avon Ri Lakeshore Resort and ends at Russborough House. Distance one way is 6.5 km which takes about 1.5 hour to complete. The trail’s grade is easy.