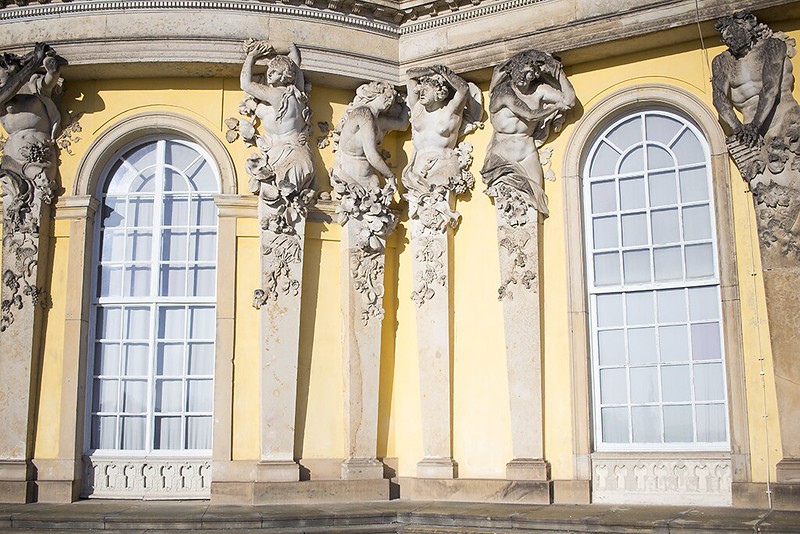 On Day 2, I left the city to go to Potsdam, a town 45 minutes away from Berlin. The reason I wanted to go there was to visit the Sanssouci park which comprises of several grandiose palaces and buildings. Unfortunately, only the main Sanssouci Palace and the New Palace were open during the low season but I still took the combi-ticket as I couldn’t pass up the opportunity to see as many rococo rooms as I could that day.
I did find it a bit puzzling that there was no Winter ticket as you only get to see 2 palaces out of the 5 buildings open in the full season for the same price. Tickets are not cheap and on top of that, you need to buy a photo permit, maps must be bought from machines, there’s a charge to the restrooms and some parts of the palaces open that day were going under some works. I don’t regret it as it was totally worth it, I had a magnificent day out and I can imagine that the maintenance of the whole park must cost a fortune but to be perfectly honest, I do feel that there should be some kind of gesture towards the low season tourists. 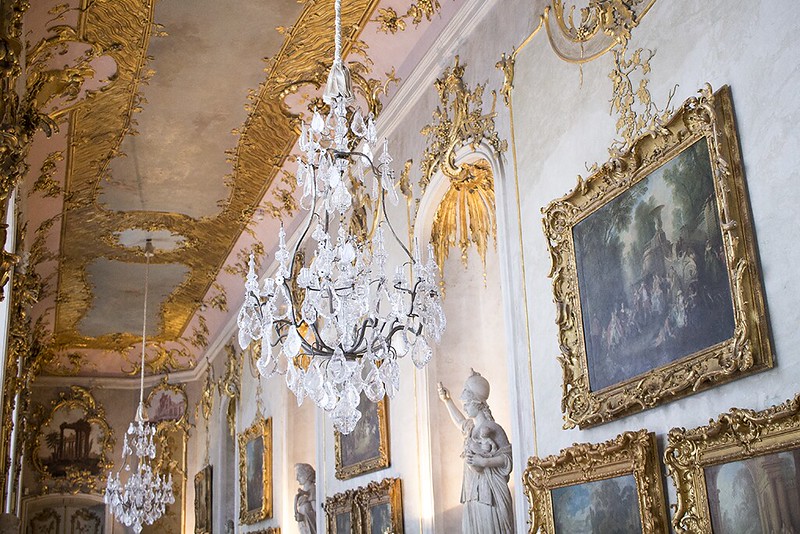 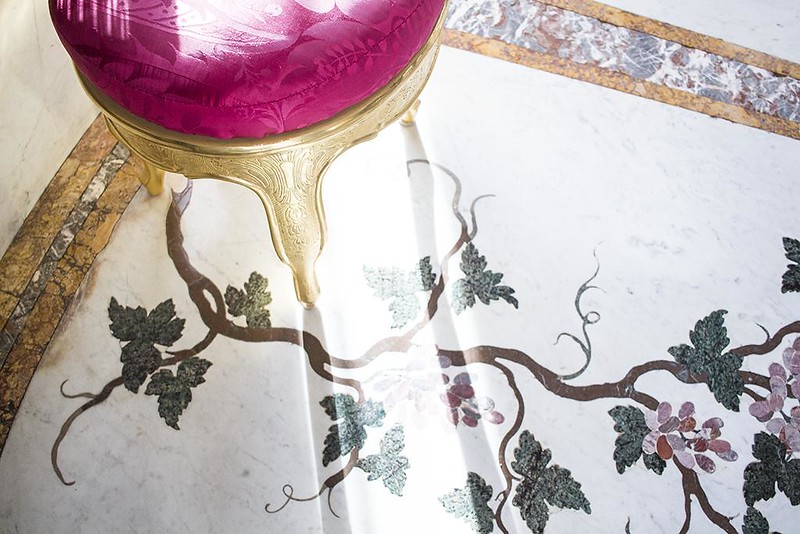 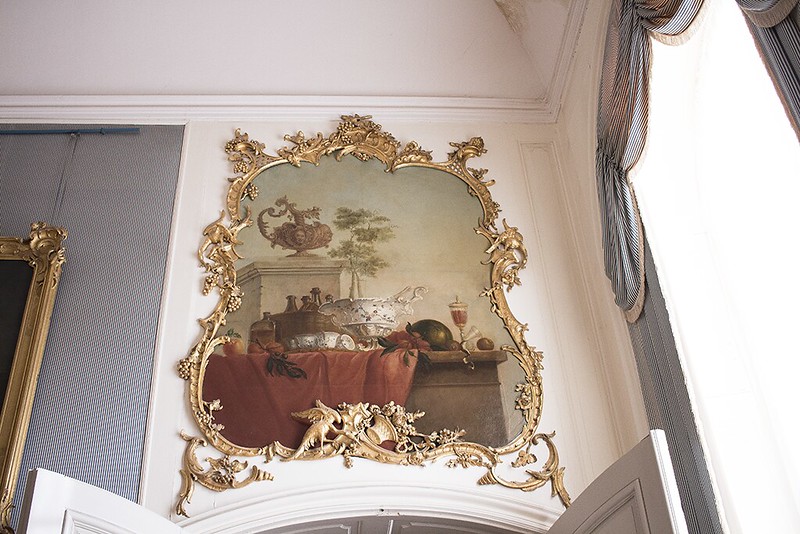 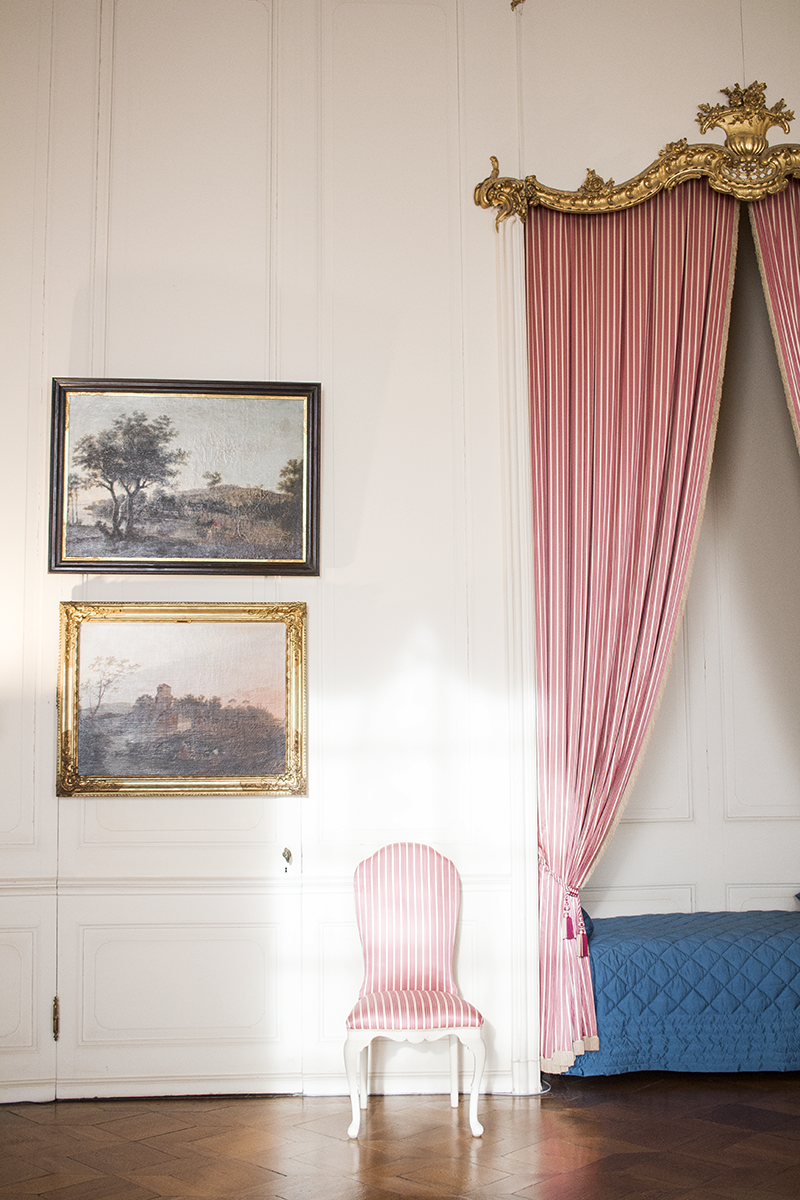 First up was the main Sanssouci Palace which was the summer residence of Frederick the Great. Forgive me if I’m not very historically accurate here, but taking pictures while holding the audio guide and keeping up with the group was a bit of a challenge. The guy was reacting against the squareness of his father who thought education was frivolous. He lived for arts and philosophy. He even asked Voltaire to come and live with him at Sanssouci. You can see the room where he stayed today, it’s a mad thing! Its yellow walls are covered with wooden parrots and flowers (I will show it to you in another post, I’ve way too many pictures to share). Frederick was as exuberant in his lifestyle as in his choice for home decor. He loved French baroque and his living space is an incredible display of the rococo trend. As a visitor, I marvelled at his taste and felt like fist-bumping the guy… Not sure I would have felt the same as a tax-payer at the time!

When the tour was done, I had some time to kill before the next one would start at the New Palace. I took that opportunity to walk in the gardens surrounding the palaces. They’re huge so it took me quite a long time to get to the New Palace and my 7 minute-late arrival caused the receptionist a panic but thankfully she let me grab an audioguide and join the group… 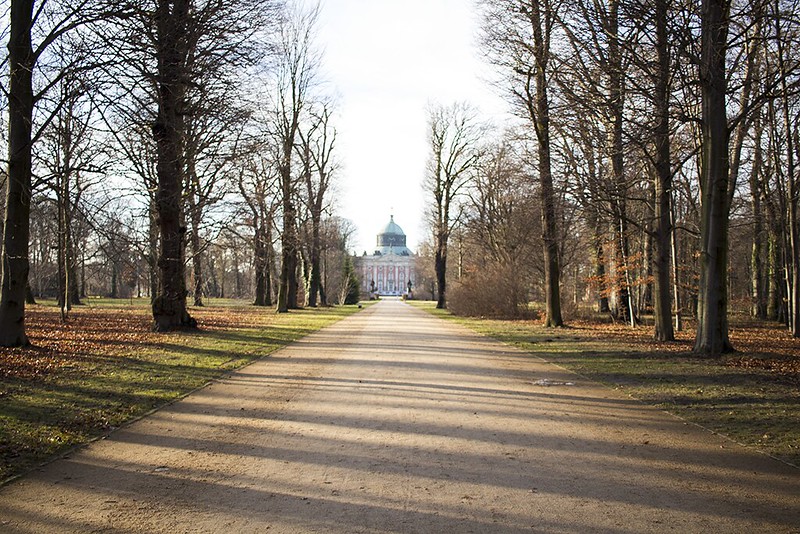 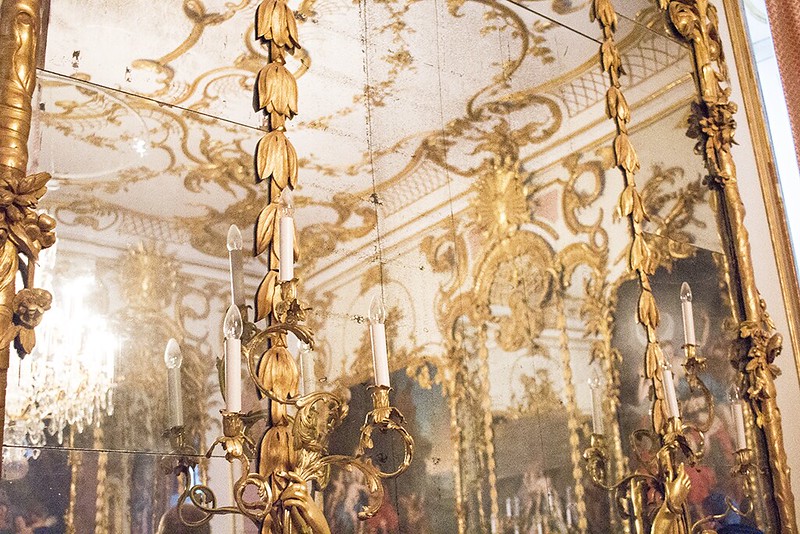 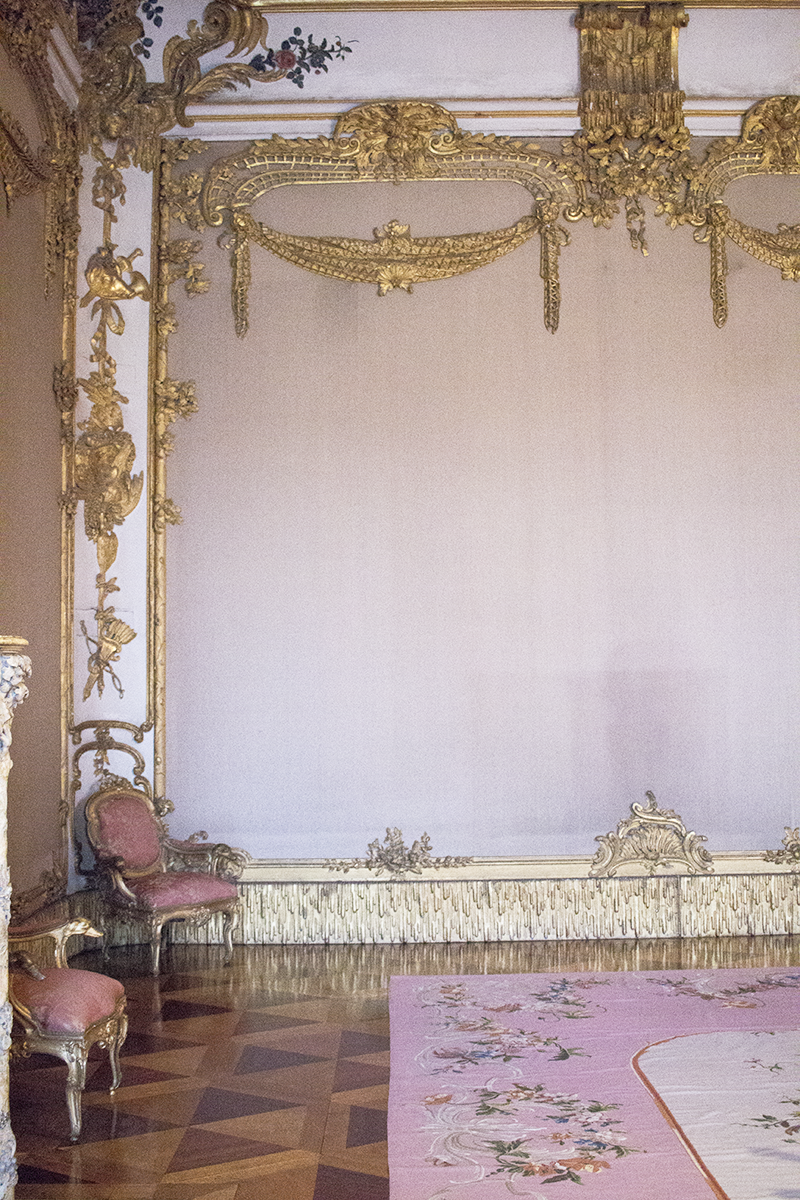 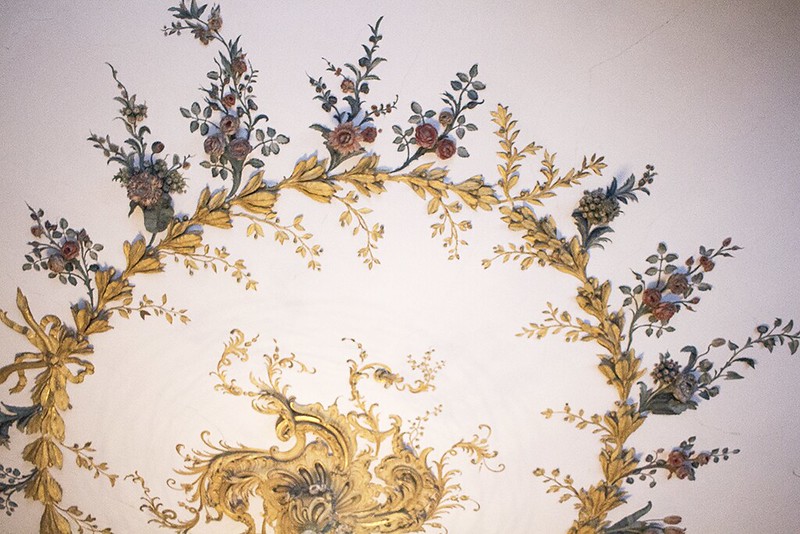 The atmosphere inside the New Palace offers an interesting contrast to Sanssouci. The windows had been blocked off, everything felt a bit dusty and sad. The rooms were freezing cold. But I think I liked it even better, it reminded me of the abandoned house Professor Emilius Browne squats in during the Blitz in Bedknobs and Broomsticks.
Rococo was out of fashion at the time Frederick the Great built this palace but he could not get enough of the chandeliers, the silk tapestries and the gilded frames. His love for rococo was so strong that a new form of the style was named after him ‘Frederician Rococo’. My kinda guy.
The New Palace had some of the most impressive rooms I had seen that day. The reception hall had a sea theme and was covered with seashells and another one with pink marble from floor to ceiling. My favourite room though was the hunters lodge, surprisingly it looked like it could have been Marie-Antoinette’s boudoir, what with its feminine blush tapestries and the wooden rosebuds carved on the ceilings.

I had a little bit of time left before the night would fall so I decided to stay a bit longer in Potsdam to check out the film museum. Unfortunately, cameras weren’t allowed inside so I’ve nothing to show to you bar my ticket. 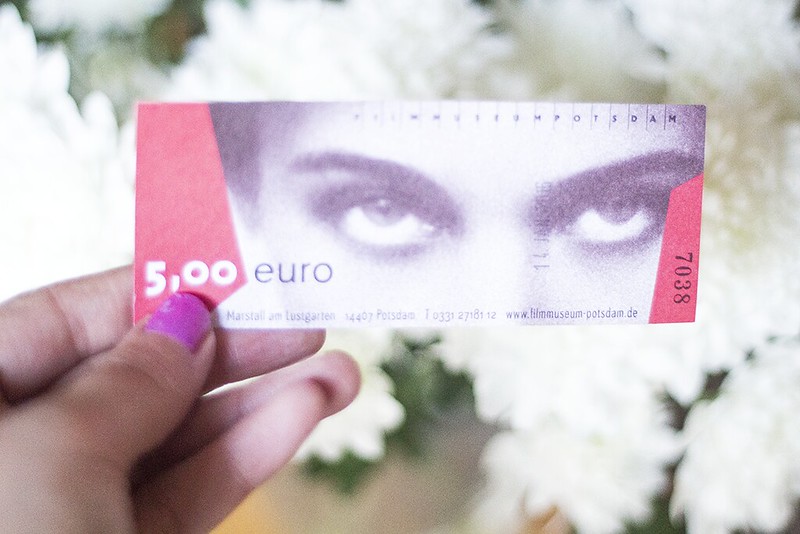 Potsdam is an important spot in the history of cinema. There, you will find Babelsberg Studios, the first ever large-scale film studio, birthplace of masterpieces such as the iconic Metropolis. To my surprise, I found out that the studios are still in activity and produced quite a few international blockbusters in recent years like Inglorious Basterds, V for Vendetta or The Grand Budapest Hotel. The Film Museum displayed quite a few props used in the nearby studios, old machinery and vintage makeup. I especially liked looking closely at the editing consoles. It turns out that editing was historically a woman’s job because of their smaller fingers. It made me smile that women had such an important role behind every great story shot on the silver screen.

Read about my first day in Berlin here.