Ha, you thought you wouldn’t get one of these resolutions post from me this year. I tricked you *evil laugh* That or I’m late to the party as usual… To be honest, I don’t generally do resolutions, but there have been a few things I’d like to improve or change when it comes to my photography habits. I thought I would list them here as a reminder to better my skills throughout the year. 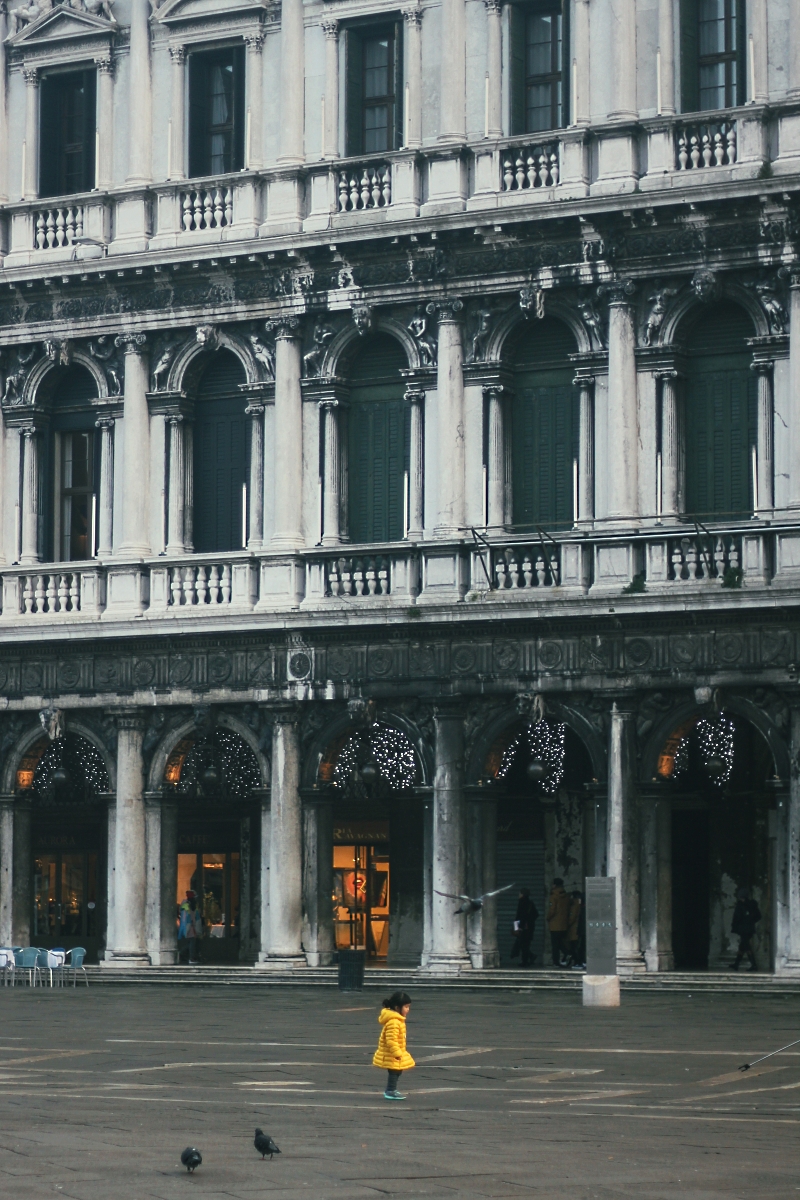 1. Integrate people in my pictures

I don’t think I’ll ever be good at portrait, I tend not to be able to make people feel at ease and I’m not always sure what one person considers their best profile. I generally think that people are pretty anyway. But, with that being said, I would love to bring more life to my pictures and catch little moments, more often than not, a person’s expression or action tells a lot more about a place than a landscape.
What I generally do is wait for a place to empty from the crowd to take a picture. But recently, I was on Piazza San Marco and as anyone who’s been in Venice know, to see the square deserted is akin to see 3 blue moons in a row, unless you like to wake up really early… and clearly that’s not how we roll here. Between my fellow tourists and the selfie stick sellers, it was a bit of a struggle. Here I was standing, losing my patience and profusely cursing when all of a sudden a little yellow dot appeared in my peripheral view. I quickly snap this tiny little being running around in the thousand year old square and somehow liked the contrast. It’s not a great picture by any means but I feel like that day I made a step towards my goal.

I’m exclusively shooting with a 50mm lens, which I still love dearly, don’t get me wrong. But I sometimes find its zoomed-in frame limiting especially when I’m in a small room and would rather shoot the whole space than close-ups of details. Also, it’s not the ideal lens to film with when moving. The cropped frame amplifies the movement and make the footage extra bumpy. I’m no connoisseur but I would love to try the Sigma 30mm f/1.4. A bigger frame while keeping a nice depth of field sounds like the best compromise to me, but if anyone has a good recommendation, I’m all ears.

I absolutely adore Jamie Beck’s work and ever since she revolutionized images as we see them online, I’ve been wanting to try to make these extra extra swish moving gifs.

Switching to the RAW format is the grown up thing to do when you’re into photography, innit? It would be nice to have more control on the image during the editing process but I’ve been putting it off as I’ve been getting slower during that phase this past year (see why in point 6).

I don’t edit in Photoshop, I edit in Paint.net . Here my dirty secret is out. I don’t think it’s such a big deal but I’m feeling so much shame typing this. The thing is, I do know how to use Photoshop (at least the basics) but I didn’t have it on my laptop for the longest time and got comfy with good old Paint.net. Now I have it, I’m too set in my old ways and can’t find the strength to switch back. Especially as I’m not sure I would do something different with Photoshop, all I use is Curves, add a white layer, grain and increase sharpness. But surely putting Paint.net on a CV must be a major faux-pas?

6. Be consistent with the editing process & style

For a long while, I edited my pictures to make them look like they were snaps out of a Canon AE-1 camera. I’m not saying I was succeeding at it but that was my general aim. I got to a point where editing was very mechanical and fast enough. Then it slowed down last year when I started being influenced, like many people, by Kinfolk-style pictures which are darker and sharper in nature. It got worse when back in November I opened an Instagram account and felt mostly attracted by bright, very contrasted and sharp shots. I feel like my editing is all over the place now and because I’m in that awkward transition between styles, it takes so much time. I’m hoping for more homogeneous pictures in 2015 and less of a confused patchwork (both for this blog and instagram).

As a fairly ‘young’ photographer, I still focus mainly on the framing and tend to forget what’s inside the four corners. I would like to make more of a conscious effort to work with the light, potential patterns and complementary colours.

This is not a photography resolution but it has do with my camera so I thought I would chuck it in here. When I started this blog, it was to supposed to be a complement to my Youtube channel. I had set the goal to film one video a week and consequently failed. Actually fail is not a strong enough word in this case.
I want to pick myself off the floor and take another go at the whole video thing, I feel like there are changes that will have to be made (possibly technical, see point 2) until I find a way to make it work for me. But I will get there.

Well that’s a lot of resolutions but hopefully now I’m accountable to you, I will make them happen. Do you have anything you’d like to improve or change on your photography? I would love to hear your thoughts, snapping buddies x

6 thoughts on “Photography Resolutions for 2015”